Only fans who have been following padel for a decade or more will remember that their presence in Europe beyond the borders of Spain was very scarce, almost testimonial. In Spain, the companies that manufactured and assembled padel courts emerged from nowhere. Of course, only a few dared with the “adventure” of trying to make padel a truly international sport, installing courts where hardly anyone had heard of it.

Padel10 opted for Finland as one of the countries in which to make a determined bet. Make an effort as an investment to make padel known in this country and start installing courts there. It all started more than 8 years ago and since then they have installed more than 90 courts. Looks like the bet went well, right?

In February 2014 and after a brief visit to Paris and a few days at the ISPO in Munich where it seemed that padel was going to grow significantly, the members of Padel10 set off for Helsinki. Another Go Expo fair awaited them there and this could be the key to publicizing a sport that has finally carved out a niche among the main ones in the country. Once the court was installed, it was about encouraging both adults and especially children to dare to try it. Ferran Vals himself, CEO of the company, acted as master of ceremonies together with his wife Arantxa, welcoming and giving the first notions of the new sport to all those who dared to try it.

The first orders arrived and the first courts installed. Interestingly, an important part of them were installed outdoors. And it may cause surprise due to the temperatures experienced in winter in Finland, but the mentality and customs of its inhabitants are not the same as, for example, in Spain. When the weather is favorable enough to play sports even if it is cold, it is not uncommon for them to have great flexibility at work and go out in large numbers to play sports. Not only padel but it is a fact that our sport has more and more room in the daily life of the Finns.

In Finland there are already a large number of courts (clubs and accommodations with courts) and part of them have the Padel10 quality seal. If those of you who read this post are from there, plan to go at some future date or simply want to see them, the Open Padel chain is the one with the most courts from the Rubí company (Barcelona). And they are currently expanding their facilities, which says a lot about their total satisfaction with the courts and also about the good progress of padel in the country.

Padel10 has since reached many more countries and we will tell you details of some of the points where it has worked and continues to work. Places where padel is already present and others where its courts will be the first where it can be played. 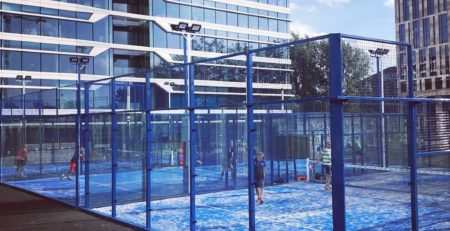 These are the new courts installed in Amsterdam, in the heart of a financial district known as Zuidas. The club... read more

We wish you are well and that you are going through this emergency situation, complex and difficult for all... read more